The Birth of 6G 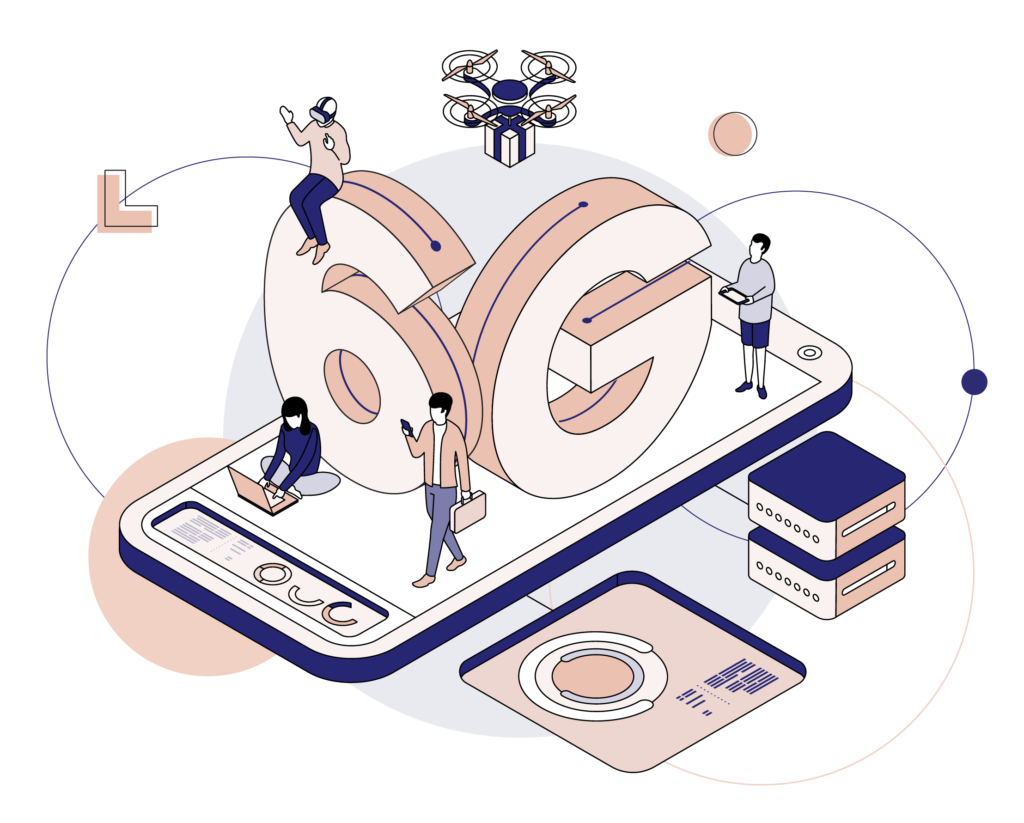 A Viewpoint by Nazih Salhab, Experienced Consultant at Amaris Consulting

While the majority of Mobile Network Operators (MNOs) are busy rolling out their 5G networks and a large chunk of mobile users worldwide are wondering how long it will take to get their hands onto the new millimeter-wave 5G apps (and what this could mean for the economy and society as a whole), the race for 6G has already started.

What exactly is 6G?

We cannot really say what 6G is! That is because 5G standards and specifications are still being defined. Apparently, 6G will build on the modernization of mobile networks that we’re experiencing in the current 5G wave: this means that technology trends such virtualized networks are setting the scene by enabling specialized deployments for 6G. Operators have already densified antennas for radio networks, so now it is easier to get signal, especially indoors. In addition, cloud technologies and edge computing mean data can be processed closer to users resulting in a decreased latency.

Broadly speaking, we can categorize the anticipated 6G innovations into the so-called ‘6G cornerstones’.

Multiple telecom players are calling for ‘secure and open’ 5G networks, supporting the Open Radio Access Networks (Open-RAN) initiative. They aim to create an alternative to the closed and proprietary networks for obvious security and privacy concerns. Therefore, 6G will be developed in response to increasingly distributed radio access networks and to the idea of exploiting the THz spectrum to increase network’s capacity, decrease network’s latency and improve spectrum sharing efficiency.

While the 5G era is expected to make our lives less centered around smartphones by relying on distributed IoT devices, we can speculate that 6G will inaugurate a post-smartphone era that will drive extended Reality (XR), significantly augmenting our senses. 6G might well enable unprecedented use cases that cannot be supported by 5G, such as holographic-type communications, pervasive intelligence, and global ubiquitous connectivity, as well as other disruptive applications that we are unable to imagine as of today [3].

Who will win the race to 6G?

Although 5G is still being deployed, multiple key players have started planning the next step.  Corporations  and  countries  are  looking  to  establish their leadership in this technology with a view to commercialize it around 2030.

Talks about 6G started in late 2019, when China stunned the world by announcing its plans to begin researching 6G immediately after rolling out their 5G network. China once again made headlines in late 2020 by sending a 6G satellite into orbit to test ultra-high communication speed using THz waves (75 GHz to 10 THz) [4]. China holds the biggest stake of 6G patents, having deposited 35% of the 38,000 filed patents applications so far [5]. Moreover, the Chinese National Intellectual Property Administration (CNIPA) reached out to Japanese and Korean corporations such as NEC, Samsung and Mitsubishi to work together and reduce the dependency on American and European technologies. According to declarations from its founder CEO declarations in September 2019, Huawei are working in parallel on 5G and 6G, which means 6G research will have started a long time ago [6].

US President Joe Biden and Japanese Prime Minister Yoshihide Suga have agreed to jointly invest $4.5 billion into 6G, and specifically into the research, development, testing, and deployment of secure networks and advanced information and communications technologies. The US currently lags behind China in terms of patents, holding only 18% of the filed patents [7]. On the other hand, Osaka University researchers have already successfully employed 300GHz band terahertz waves as an information carrier.

South Korea hopes to commercialize 6G between 2028 and 2030, as reported by its Prime Minister in August 2020. Their strategy consists of the preventive development of the security standard for next-generation technologies. This program [8] aims to:

One of the European Commission’s research initiative for 6G is a project called Hexa-X [9], which is meant to lay the foundations for next-gen wireless and drive the 6G roadmap. This 2-3-year project started in January 2021 after receiving approximately €12m funding from the European Union Horizon 2020 research and innovation program [10]. Hexa-X is led and coordinated by Nokia, while Ericsson is responsible for the technical management aspects. Many other partners from both academia and the private sector are also involved in the consortium, including service providers, network suppliers and European research institutes such as Orange, TIM, Telefonica, Intel, and Siemens. The University of Oulu in Finland began 6G research as part of Finland’s flagship program, called 6G-Enabled Wireless Smart Society and Ecosystem (6Genesis) [11]. It focuses on reliable near-instant unlimited wireless connectivity, distributed computing and artificial intelligence, as well as future materials and antennas [3].

So-called over-the-top (OTT) players are also involved in the race to 6G. For instance, in early 2021 Apple announced they are seeking engineers to develop 6G technology [12]. The Silicon Valley giant has already joined a group of companies responsible for creating the 6G standards and future cellular network technologies. The Alliance for Telecommunications Industry Solutions (ATIS) announced the launch of the Next G Alliance [13], an industry initiative that will advance North American mobile technology leadership in 6G and beyond over the next decade. The Next G Alliance’s objective is to encompass the lifecycle of research and development, manufacturing, standardization and market readiness for 6G. Founding members include AT&T, Bell Canada, Ciena, Ericsson, Facebook, InterDigital, JMA Wireless, Microsoft, Nokia, Qualcomm Technologies Inc., Samsung, TELUS, Telnyx, T-Mobile, US- cellular and Verizon.

A focus group called ‘Technologies for Network 2030 was established in July 2018 by the International Telecommunication Union (ITU) Telecommunication Standardization Sector (also knowns as ITU-T). This group intends to study the capabilities of networks for 2030 and beyond and to support novel scenarios, such as holographic-type communications, ubiquitous intelligence, Tactile Internet and digital twins [3]. As mentioned above, the European Commission is sponsoring 6G research as part of its recent Horizon 2020 funding scheme, which kicked off several research projects at the beginning of 2020. The EC has also announced its strategy to accelerate investments in Europe’s “Gigabit Connectivity” including 5G and 6G to shape Europe’s digital future. At its meeting in February 2020, the International Telecommunication Union Radiocommunication Sector (ITU-R) decided to start charting future technology trends for the evolution of International Mobile Telecommunications. In October 2020, the Next Generation Mobile Networks (NGMN) also launched its new “6G Vision and Drivers” project, intending to provide early and timely direction for 6G activities [3].

With 6G we are approaching the upper limits of the radio spectrum, reaching extremely high frequency levels of 300 GHz and hitting terahertz ranges. The obvious challenge is coverage: it needs to be much better than what we are currently witnessing with 5G networks, which are extremely localized due to the inherent limits of millimeter waves. 6G can achieve this by shifting from a radio communication network to a radio-optical-satellite system exploiting all of electronic, photonic and satellite technologies.

Furthermore, 6G has the potential to become a connected intelligent platform maximizing the synergy between AI and mobile networks. Ultimately, 6G is coming; those who invest in research early on will be at the forefront of this new technology, with all the benefits that derive from it. Suppliers are acutely aware of this and the race, as we saw, has well and truly started. The question is : are we, as consumers and humans, ready for the myriad ways 6G will revolutionize our lives?

Find out more about Amaris’ Telecom capabilities at amaris.com.