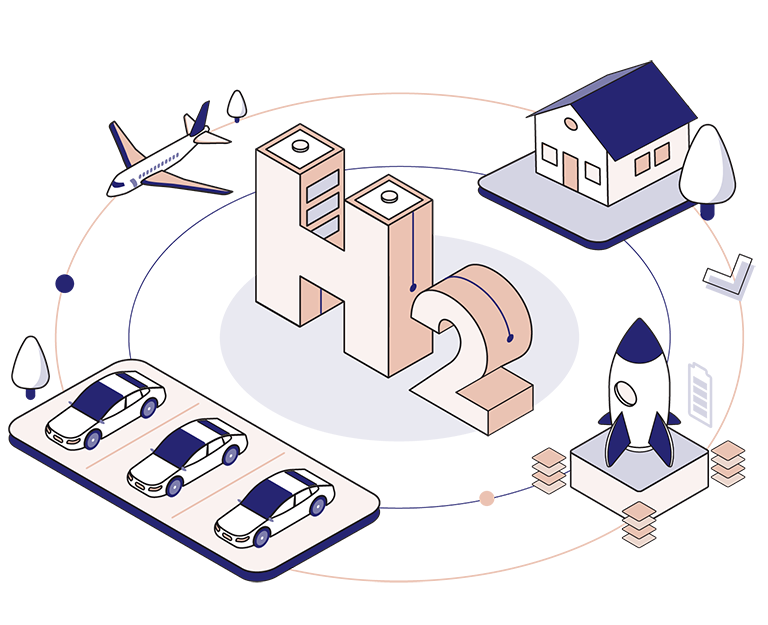 H: the smallest, simplest, lightest, and most abundant element in the universe is currently causing a stir in the scientific and business community, perhaps even paving the way for cleaner energy across the globe. Yet hydrogen has a checkered past: from the Hindenburg incident to the infamous H-bomb, it has long been abused by humans the world over.

Over the past few years, however, the beneficial side of hydrogen is increasingly coming to the fore, as the energy and transport sectors have completely rewritten the rule book on the idea of using hydrogen as a clean energy source. What’s more, interest is being piqued all over the planet: as of early 2021, more than 30 countries had launched hydrogen-linked projects, with over $300 billion invested in more than 228 programs.

Europe may be leading the pack with no less than 126 industrial projects being developed, but Asia, Oceania, and North America are also stepping up, with 46, 24, and 19 programs respectively.

At the source of this worldwide revolution are two very simple and well-known chemical processes:

Why the interest in hydrogen?

These two processes provide an opportunity to totally rethink the energy chain as we know it today. Today, we are essentially unable to store all the energy produced by power plants, and energy producers are thus required to produce more than the amount required by users.

Electrolysis, combined with the use of a fuel cell, will in turn allow us to use hydrogen as a storable vector which will come to power the energy circuit upon a global rise in consumption. This storable hydrogen could even provide fuel for equipped vehicles. This system could also make it possible to get around the intermittent nature of solar and wind energy, by compensating for times when production declines due to lack of wind or sun.

In current global ecological and environmental thinking, hydrogen seems to be a real solution. However, there are still many challenges to overcome before we see a radical shakeup of our energy chain.

The first obstacle is how to get our hands on hydrogen. Currently, 96% of hydrogen obtained annually comes from the transformation of carbon-based energies, especially natural gas. In other words, using hydrogen in the energy chain, or even as a means of propulsion, would be like robbing Peter to pay Paul, and the desired ecological advantage would be conspicuous in its absence.

Scientists therefore challenged themselves to produce “green” hydrogen, obtained from renewable energies, such as solar or wind. Nonetheless, this is not without its challenges, which include the impacts of the manufacture of wind turbines and solar panels, requiring the use of chemical compounds which are sometimes toxic and dangerous.

Some manufacturers favor the production of hydrogen from biomass, by thermolysis or gasification, but this is not yet economically viable, with the price of biohydrogen being too high to be competitive on the market.

There is one last option: the use of “white hydrogen”, extracted from pockets of gas obtained from the crusts of certain continents. However, the exploration of this “other” hydrogen is still in its infancy.

Performance is the ratio between the energy supplied at input into a system and the energy returned. It is estimated that the performance yield of a hydrogen chain (Electricity à Hydrogen à Electricity) oscillates between 25% and 30%.

The comparison with other technological chains, from source to use, is concerning: we obtain, for example, 70% performance yield with electrochemical storage by accumulator or battery. There is therefore real progress to be made to improve the electrolyzers and fuel cells currently being produced, in order to be able to limit losses.

One of the major problems linked to hydrogen is due to its extremely low density. It occupies a much higher volume than any other gas, which creates real problems for its storage and transport. Several techniques are thus being studied by engineers, such as:

Each of these techniques has its advantages but they share a common problem: how to store the hydrogen. The answer lies in using composite materials to support the related mechanical forces. The bottles and tanks are thus manufactured by filament winding of long liber composites, reinforcing a polymer liner, thus allowing the casing to withstand high pressure.

There is a further challenge: routing. Existing natural gas networks can provide a solution and hydrogen pipeline projects are also emerging. Given that a 40-tonne tanker can only carry 300kg of hydrogen, the supply of petrol stations raise a real question.

The possibility of local hydrogen production is currently being explored in a study on the construction of small electrolysis units, but this will require local investment as well as land for installation.

Before we can imagine hydrogen in aircraft, boats, cars, trains, or as a means of industrial or domestic heating, safety needs to be addressed. Hydrogen remains a very sensitive gas, capable of igniting at the slightest spark of static electricity. Although safety standards have been established since 2009 to regulate its use in cars, there are still many standards to be defined for the other possible uses.

One of the major challenges that will allow green hydrogen to prevail remains its cost, which is not at all competitive. Currently sold at between €10 and €12 per kilo, the objective would be for the cost of renewable hydrogen to reach that of “grey”; below €2 per kilo. On this subject, analysts are optimistic, but it will take time: BloombergNEF estimated in April 2021 that a 40% price reduction in of solar electricity should result in an 85% reduction in the price of green hydrogen by 2050, bringing it well below the $1/kg mark.

How hydrogen is used today

Despite all these constraints, many industrial projects have already emerged, and have even expanded in recent years. Here are a few examples:

How we are supporting hydrogen initiatives

Thanks to our expertise in the energy and transport sectors, Amaris Consulting is already working within the hydrogen ecosystem. Through our Engineering and Information Systems & Digital business we can:

It is still too early to say whether hydrogen will succeed in establishing itself as a standard. Like any technology, it will have to attract the support of end users to be able to integrate definitively into the energy chain. But the significant investments made by many countries, coupled with changes in mindset on the preservation of our environment and the ever-increasing technological innovations suggest that it can become a serious vector for change, with the capacity to revolutionize the energy and transport sectors.

You wish to learn more about our capabilities? Discover our Transportation and Defense industry knowledge.